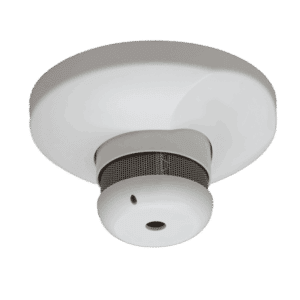 In the event of a fire, during the smoke development phase, the smoke detector sounds an alarm. It is particularly suitable for the early detection of fires because it detects light smoke before the flames and heat appear. In this case, the smoke detector emits a shrill alarm tone which continues until it is deactivated. At the same time, the wireless module transmits the alarm to the Carephone, which in turn transmits it via the phone network to the 24-hour control centre. This ensures that the proper fire-fighting measures are taken and people who are in danger can be brought to safety. In addition to the smoke detector, you can use a Wireless Temperature Detector.

The optical smoke detector functions via the scattered light principle. In normal cases, no light falls on the photo diode. Instead, scattered light only occurs as soon as smoke particles penetrate into the integrated measurement chamber. In this case, the photo diode detects that the light beam of smoke particles is reflected. Here if a certain value is exceeded, the alarm is activated and this is forwarded to the Carephone. Automatic battery monitoring is also integrated into the smoke detector, which signals low battery levels and forwards a message to the receiver.

Advantages at a glance: